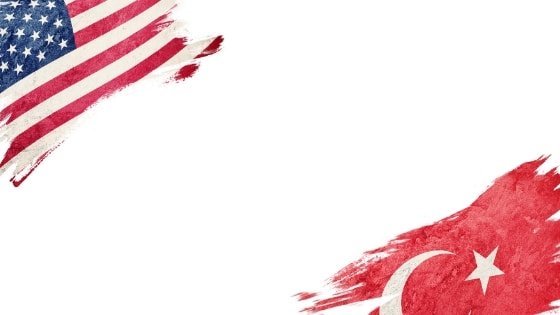 The S-400 deal between Russia and Turkey is the latest point of contention in the U.S.-Turkey relationship. “We’ll not stand idly by while NATO allies purchase weapons from our adversaries,” U.S. Vice President Mike Pence said last month, “Turkey must choose. Does it want to remain a critical partner of the most successfully military alliance in the history of the world? Or does it want to risk the security of that partnership by making reckless decisions that undermine our alliance?”

The relationship has, in recent years, become more and more strained with each passing event. The United States condemned the July 15, 2016 coup attempt in Turkey. The detainment of U.S. pastor Andrew Brunson (now released). Divisions over the strategy in Syria. The United States continues to emphasize the importance of Turkish government responses that build public trust in Turkey’s democratic institutions and the rule of law consistent with human rights commitments.

But the economic numbers paint a different picture: despite these strains, Turkey is a NATO ally and critical partner in a volatile region. It is in the United States’ best interest to improve the U.S.-Turkey economic relationship, and to keep the country anchored in the Euro-Atlantic community. The problem is that the strains that come from political differences serve as a major roadblock in the flourishing of a robust trade relationship. The numbers tell it all: the United States needs to maintain and further its trade relationship with Turkey, and that involves resolving political disputes.

In the past decade, trade between the United States and Turkey has nearly doubled, jumping from $10.8 billion in 2009 to $20.5 billion in 2018. Exports grew to $207.3 billion, $1.9 billion more than in December. Imports were $6.8 billion between January and December, but this is reflected in a decrease in the goods deficit of $8.2 billion, but an increase in the services surplus of $0.5 billion, according to the Bureau of Economic Analysis

This increase in trade has risen Turkey in the ranks for its economic closeness with the United States. In 2018, Turkey was the United States’ 28th largest goods export market, and the 34th largest supplier of goods imports. Turkey is also the 10th largest purchaser from the U.S.

Spoke w/ President Erdogan of Turkey to advise where we stand on all matters including our last two weeks of success in fighting the remnants of ISIS, and 20 mile safe zone. Also spoke about economic development between the U.S. & Turkey – great potential to substantially expand!

Indeed, the potential for substantial expansion is evident. Trade volume between Turkey and the United States may reach $75 billion through a free trade agreement and the removal of regulations and tariffs. According to officials on both sides, it remains moderate compared to it’s potential.

“The current trade volume figure of some $20 billion is inadequate, we have to change the rules of the game,” Mehmet Ali Yalçındağ, Chairman of the Turkey-U.S. Business Council (TAİK) said. “A free trade agreement between Turkey and the U.S. will boost bilateral trade,” he told Anadolu Agency.

James Jones, Chairman of the American-Turkish Council, stated the following: “I’m of the opinion that we can do a lot more, whether we go up to $75 billion or not, I don’t know, but there are some things that we can do to narrow the odds that might happen in terms of tariffs and trade policies, regulations that are no longer useful, you know. As we move more towards a free trade relationship, I think that you’ll find that we’ll make faster progress to get to that $75 billion.”

Both countries are interested in signing a free trade agreement to remove all trade barriers in front of them, but as Jones recalled Turkey’s customs union agreement with the EU creates an obstacle to attaining that. Perhaps more importantly, though there is immense commercial and economic potential between the countries, political tensions show no signs of ending. Issues surrounding the sale of S-400s from Russia to Turkey, and, to understate, differences regarding the Syrian problem have placed the free trade agreement in permanent suspension.

These issues, among many others, have created tensions that indirectly lead to the devaluation of the Turkish lira against the U.S. dollar. For example, last year, Turkish officials endeavored to prevent the Turkish lira from depreciating after President Erdoğan criticized the United States’ recognition of the Golan Heights as Israeli territory.

Issues that create tensions between Turkey and America are leading to the devaluation of the Turkish lira against the dollar. Lastly, Turkish officials endeavored to prevent the Turkish lira from depreciating after President Erdoğan criticized America’s Golan Heights.

Other issues remain. In addition to the S-400 missile defense system and Syria, there shows no sign of resolution between divering positions on Iranian oil; the imprisonment of American consulate employees; the United States’ Middle East policy; and the extradition (or lack thereof) of Fettulah Gulen to Turkey. Unless such political issues are resolved, the trade relationship between the United States and turkey will continue to face severe impediments.

Just this week, Turkish officials ordered a redo of the Istanbul mayoral elections, narrowly won by a member of the Turkish opposition. The decision is viewed by many as an attempt by the ruling AKP party to regain control of Turkey’s most economically-important city and has been called out by some in the international community as undemocratic. The turmoil has led to the drop of the Turkish lira to a 7-month low.

Given the weight of political tension, the necessity of resolution cannot be understated. Companies have great responsibility in the realization of economic potential between the United States and Turkey. However, even this remains dependent on the political reality. Would-be investors worry that the Turkish lira could lose value at a moment’s notice. Should the two countries solve the manifold political problems between them, producers and enterprises of both countries will win thanks to the expansion of business volume.

Larry Fowler is the publisher of USMilitary.com Network one of America?s premier privately owned