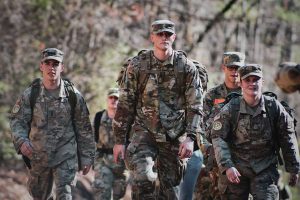 US Military jobs. Not only could you use these to have a fulfilling role while you serve in the military, but they can help you find a career.

Right now, there are about 1.2 million people that are on active duty in the military. To get started, all of these people had to pick a US military job that fits best for them.

Here are a few that stand out.

One job that you can have in the military is to work with counterintelligence. In war and combat, it is crucial to have an idea of what your enemy is thinking and what they could be planning.

Well, people that work in counterintelligence would be on the front lines to get all of this information out to their superiors. The best part is that you can extend this career outside of your military branch if you do well enough.

You can work with organizations such as the FBI and the CIA on the ground if you wish to move on from the military at some point. It could be a great start to a future career in that field.

Another thing that you can get involved in with the military is cyber warfare. Let’s face it, the concept of warfare is changing.

It is not always about the weapons you have and the troops that you can deploy. Rather, a war can be had with hackers trying to break into military security or through false narratives gone rampant.

In the military, you can have a job that specifically fights this, and it is something that you can carry outside of the military as well.

Something else that has come up in recent years is someone whose job it is to fly a drone. This person can be essential to figuring out where you can fly the drone in the first place, the mechanics of the drone, how to properly maneuver around obstacles, and how to stay discrete.

Doing this for the military can help them get a better idea of the environment that they are facing. After the military, you can take this skill and use it for videography to help businesses get good drone footage of a certain area.

One of the best jobs that you can carry over after serving in the military is a pilot. Why is this?

Because being able to fly an aircraft is not only useful for military combat, but it is also a great skill to have for civil service. The reason for this is that whether it is for military use or commercial aircraft, the United States is short on pilots.

So, if you develop this skill in the military, you could make a good living off of this skill once you are done serving.

Going off of cyber warfare above, you are going to need people that have a good feel for technology. These people need to know how military technology works, know when there is an issue with the technology, and how to fix any potential issue that comes up.

This is not the easiest skill to learn, as computer data can be like a foreign language for those not familiar with it. However, those that master it can go on to make a great living in the IT field after their time in the military is over.

Something else that you may want to learn in the military is the artillery that you are going to be useful. This is important to know what weapons are appropriate in certain situations, how to properly use those weapons, how to maintain the weapons, and how to fix any issues that can come up with them.

On the battlefield, this can be the difference between winning the battle or losing your fellow soldier. Off of the battlefield, you can teach civilians how to properly use certain artillery and anything else that they need to know about it.

This may not come to mind immediately when thinking about the military. However, at the end of the day, somebody has to feed the troops and other active personnel on the ground.

With that in mind, it is very realistic to have a job in food service if you want to serve in the military. This can keep you out of direct combat, and on top of that, it is a skill that can easily transition to careers outside of the military.

You can gain experience feeding troops and then perhaps become a chef in a well-known restaurant once your time in the military is over.

Unfortunately, when it comes to military service, people are going to get hurt when it comes to this line of work. That is why it is important to have appropriate healthcare professionals working in the military.

These can be anyone from doctors, nurses, and more to help treat wounded soldiers that are fighting for their country. These frontline workers take it a step further by helping these troops recover in any way they can.

Best of all, this is a job that civilians are more than happy to have your help in outside of the military.

These are just some of the military jobs that you can have that could help you have a future career. Whether you want to work in cyber warfare, counterintelligence, healthcare, or even food service, there is a military job out there that is likely to fit your skillset.

Do you want to know more? See our careers section to find the job for you.